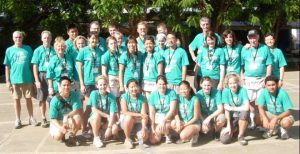 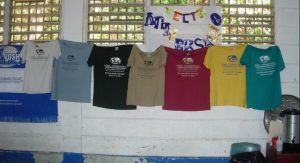 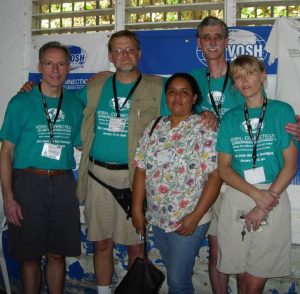 We were joined by 12 first year optometry students from the University of California School of Optometry at Berkeley: Kenzo Otsuji, Jenny Nguyen, David Leong, Jennifer Park (Student Leader), Dale Choi, Jessica Lee, Nancy Luu, Josie Yang, as well as Nick Blondin (3rd VOSH-CT Mission), 4th year UCONN Medical School, and 4 3rd year students from the Netherlands: Kirsten van Althena, Martine van Angelen, Elien Janssen, Astrid Snijder. These 13 students were some of the best students we have ever worked with over the past 10 years, and we are very grateful for the excellent service and hard work they all provided as mission members. 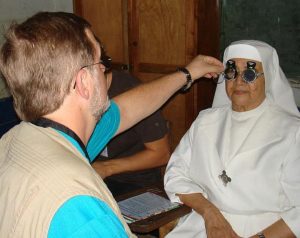 Joyce Krinitsky continues to do her outstanding job as second in command, and the mission would not be the success that it was without all of her continued help, assistance & support. This mission has grown too large and too complicated for one person to handle, and would no longer be possible to run without the assistance and efforts of Joyce Krinitsky. Opticians Dottie Byus and Mareshah Lynch returned once again to run the dispensary and did an excellent job as always. The dispensary part of this mission is now completely self-sufficient, and for that we are eternally grateful for the leadership & support of both Dottie Byus and Mareshah Lynch as well as their able and outstanding assistants, Tommy Thompson & Olivia Quinn.As in year’s past, approximately 50 local residents assisted with the clinic duties, led for the tenth time by local doctor Dra. Rosa Elena Bello, with assistance by school Principal Ana Luisa Mora, who will be leaving her position after 29 years as school principal due to the current control of the Nicaraguan educational system by the new Sandinista government. Ana Luisa served our mission for 10 years with supreme dedication and selflessness, and she will be sorely missed on future missions. 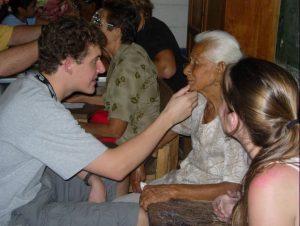 Three thousand pairs of glasses were purchased by VOSH-Connecticut from the Virginia Lions Club, along with 3,000 pairs of sunglasses & 1,000 pairs of readers. Also assisting with the over-all organization on the ground was local resident Chris Berry, Esq., along with his able assistants, Vilma Bustos . We also thank the entire helpful & knowledgeable Pelican staff, including Kathy Knight & Photographer Cesar, for all of their time & wonderful contributions to the mission. As previously stated, because of the current global situation, it is no longer possible to transport any mission supplies with us. This mission is only able to continue because of the generosity & support of Chris Berry & Pelican Eyes, who allowed us space on their shipment container. We cannot emphasize enough how appreciative & grateful we are to Chris Berry, because as stated, without him, this mission will cease to exist. In addition, because of the new political climate in Nicaragua, we are extremely grateful for the continued support & assistance of San Juan del Sur Mayor Eduardo Holmann, who is now serving his last year of his four year term as Mayor and who honored us along with Dra. Rosa Elena Bello for our 10 years of service to the residents of the San Juan del Sur area, which we were very humbled and honored to receive. We are also grateful to Jane Mirandette, Mike & the Villa Isabella for all of their help & assistance for many of the mission members who stayed there. We also appreciate Angelo LaMonica for his generous donation of candy supplies for the patients, and our assistant Nicole Rolli for her help & assistance with all aspects of this mission. 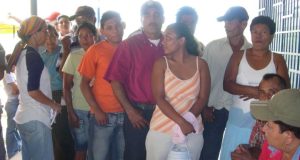 The clinic was held for the tenth year at the Centro Escolar Enmanuel Mongalo y Rubio. It was set up Sunday, January 13, 2008 with 5 examination rooms, a pre-testing room, dispensary & lunchroom. The clinic officially opened on Monday, January 14, 2008 at 8:00 a.m. Breakfast was provided each day by VOSH-Connecticut beginning at 7:00 a.m. Patients were seen from 8 a.m.-1 p.m., with a break for lunch provided by VOSH-Connecticut from 1:00-2:00 p.m., along with a daily briefing meeting. Clinic then resumed from 2:00-5:00 p.m. As in the past, VOSH-Connecticut provided for all expenses for both mission members and local volunteers relating to the clinic including breakfast, snack, lunch and the closing banquet. Over 90 people attended the closing banquet, with terrific local entertainment provided by Pelican Eyes, and Joyce Krinitsky, Dr. Jerry Hardison, Dr. David Kendrick, Tommy Thompson and Olivia Quinn were all presented with 5 year Certificates of Appreciation  from VOSH-CT. 10 year Certificates of Appreciation were presented to Dra. Rosa Elena Bello and Chris Berry on behalf of VOSH-CT.

Over the four-day clinic period, we saw 2,428 patients broken down as follows:

These totals represent an increase of 69 patients over last year’s total of 2,359, and we are at a comfortable level of approximately 550-650 patients per day for each of the 4 clinic days, and continues to serve as a general guide for an average pace going forward for the future. As in years’ past, university students under the direction of Dr. David Gullette of Simmons College provided translating services for the clinic, for which we continue to be very grateful.

Throughout the mission, all communications were held in both English and Spanish, as in years’ past. Common pathologies continue to be encountered including cataracts, pterygia, glaucoma, corneal foreign bodies, toxoplasmosis, conjunctivitis, retinal disease, hypertension and some cancers. Our paid security staff returned once again, and provided excellent & safe services for all not only at the gate but at each exam room as well. Follow-up treatment facilities continue to be lacking, and while lists of names were kept of needed patient cataract surgeries, other medical conditions such as goiters, heart problems and possible carcinomas remain untreated with little or no further treatment options.

Numerous drugs were donated by Alcon Laboratories, Inc., Allergan Pharmaceuticals and Dr. Bradley Rosenberg, and were most appreciated and used throughout the mission. Leftovers were donated at the conclusion of the clinic to Dra. Rosa Elena Bello. Encore Optical continues to be very generous in their donation of lenses & services to patients with special needs, for which we are very grateful.

VOSH-CT hired a bus to bring patients in from the local & surrounding areas for all 4 days, & provided for 4 days of bus service from the San Jorge area, which worked very well and the efforts of Joyce Krinitsky in this regard are most appreciated. For the first 2 days, we also saw several hundred Pelican workers, providing a very nice addition to the clinic, and on Wednesday a busload of children and young adults traveled from the Nagarote area under the auspices of the Norwalk, CT Sister Cities program and led very ably by Sarah Proescher. While the immediate San Juan del Sur area continues to show some signs of economic growth & improvement, the areas surrounding San Juan del Sur continue to suffer extreme poverty & need. Water and electricity are scarce at times, and prices are rising rapidly, causing some families to be unable to adequately support themselves. Wages average around $5/day, and the average per capita income of Nicaragua is around $700, making it the second poorest country in the Western Hemisphere. Roads in certain parts of the country, and in particular on the way in to San Juan del Sur are in horrible disrepair, and almost impassable in some places. Promised government repairs have yet to occur, making travel very difficult, especially at night. Our increasing efforts led by Joyce, Kathy & Jane to outreach in as many ways as possible to the surrounding and outlying areas are proving immensely successful in helping us to achieve our goal to provide services & help as many people in need as possible during the 4  day clinic.

Many local mission volunteers returned to help us for the 10th time, as the mission celebrated it’s 10th year of service in San Juan del Sur, a very special and meaningful show of support to both Dr, Blondin and myself. San Juan del Sur is an extremely different place than it was 10 years ago. Real estate development has overtaken large parts of the town, forcing long-time residents to move to other locations, some within and some out of town all together. Jobs are more available, especially for those residents with opportunities to learn English, but wages remain very low by Western standards and with rising prices often do not provide adequate income to support an individual or family. Mayor Eduardo Holmann has been a special and integral part of our mission and it’s success over the past 4 years, and it remains to be seen what will happen going forward after the upcoming new mayoral election this November.

During a break from mission activities, Dr. Blondin & son Nick were surrounded by Nicaraguan army personnel with pointed AK-47 rifles for allegedly trespassing in an off limits beach area. Only because of the help received by our now bi-lingual foster child Orlando Sevilla who was with them was an explanation satisfactorily received, allowing them to escape unharmed. At the conclusion of the mission, a lovely closing banquet was held at the Pelican, and we were presented by Dr. Brian Lynch with an Official Citation signed by Connecticut Governor Jodi Rell for our work on behalf of VOSH-CT, which was very special and meaningful to us both.

Overall, this year’s mission went very smoothly, due in large part to the fact that so many mission members have worked so often and so well together in the past, and continue to recognize service above self. Mission members came away with a great deal of self satisfaction knowing that many in need were helped by their generous and unselfish efforts, and VOSH-CT continues to be grateful to all of those, both here and in Nicaragua, who work together as a team to provide eye care to so many who otherwise would have none.

Get In Touch With Us Today